“When you realize how perfect everything is you will tilt your head back and laugh at the sky.”

Excellent. Though I do find it interesting that many folks continue to insist on referring to the Obama administration as “failed”. The appropriate term, as has been apparent for the last year at least, should probably be “complicit”.

Back to obscure technical topics for a moment.

Figuring out how to set umask for Apache on Ununtu was faaar more difficult than it needs to be. Even though it’s not an environmental variable, the “Ubuntu Way” seems to be to add this to the end of /etc/apache2/envvars like so:

Restart Apache and voila, the above umask will give all files written by Apache a chmod of 777.

Use this particular example with caution.

At the end they hold up empty hands to the air and chant “These our are weapons!” Peaceful disobedience at it’s finest.

It used to be just “Crooks and Liars”.

Despite the various reasons driving people to protest, it all essentially boils down to this. 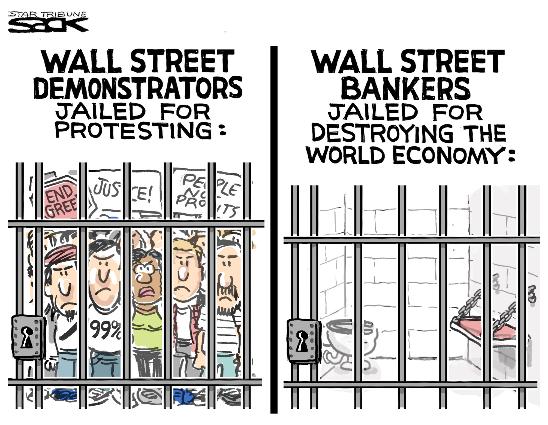 As reported by Glen Greenwald on Friday, the U.S. government is now, via remote control drones, assassinating citizens that it, the government, deems a threat, without formal charges, and without due process. Politico has a good update here.

As Dr. Paul Craig Roberts points out, that threat came in the form of free speech from Inspire Magazine’s publisher, Samir Khan, and — in particular — the sermons of a moderate American Muslim cleric, Anwar Awlaki.

Awlaki had advised the U.S. government after 9/11 on Muslim extremist counter-terrorism. According to Roberts, Alwaki was disillusioned and radicalized by this experience.

You know, I voted for Obama. And over the years, as the wars have expanded, the spending accelerated, as civil liberties have been aggressively, deliberately eroded, I have, on very rare occasions, polled friends and family for their opinion. Of those who supported Obama, the response has been generally apologetic. “He needs more time,” say some. “The administration is trying to compromise,” lament others. “He’s in our court; Obama just needs time to negotiate,” seems to be the sentiment.

I don’t see this. I see, instead, an administration hell-bent on entrenching and expanding illegal powers bestowed on it by the administration before. The Bush Presidency pretended to cater to it’s Republican base while aggregating power into the Executive Branch. The Obama Presidency pretends to cater to it’s reactionary Democratic base, promising to reverse former abuses, while in reality consolidating the very same powers it had vowed to reverse and restore to the people.

Roberts sums it up poetically:

The Obama Regime, like the Bush/Cheney Regime, is a regime that does not want to be constrained by law. And neither will its successor. Those fighting to uphold the rule of law, humanity’s greatest achievement, will find themselves lumped together with the regime’s opponents and be treated as such.

Power consolidated, with these drone attacks the Obama Regime is testing the waters, exercising freshly minted authority to set precedent.

A frightening precedent it is.

How much longer, I wonder, before the drones come home to roost.

could certainly help to explain this: